For some time now I have been wondering what sort of learning we are obtaining through social software. To be sure, when I do Geocaching I learn a little bit more about my environment, but it is nothing that I would not have learnt if there were a notice board next to the feature where the cache was buried.
At the same time, what am I learning when I use Waze to navigate? If one defines learning as "to be able to do something afterwards that you could not do before" then owning a GPS device means that I can now reach a destination, which I could not do before. I cannot read a map. I never could. Besides, reading a map while driving is dangerous.  Now, with a GPS, I can reach a destination safely without having to read the map.  So, I learnt to navigate without having to navigate.  HOWEVER, with a social application such as Waze, other users also input data into the system, and now I can avoid congestion on roads that I cannot see.  Waze knows where the congestion is because other road users have reported it. At the same time, when I report congestion (or by simply driving with Waze open) other Wazers can also avoid congestion.  But here's the question - ok so now I can do something that I have never been able to do before - I have almost developed a sixth sense - but what have I learnt.  And then I read Steve Wheeler's post and I realized it's not what have I learnt. It is what have we learnt.  And the "we" are three entities. It's me, it's other road users, and it is Waze itself.  Here's where Learning 3.0 becomes clever.  Learning is now integrated in to the whole system - it's not just the teachers and the learners who are learning, it is also the supporting technologies that are learning.
Google knows what I am searching for before I have even finished typing the search string - because it knows what I searched for before, and it knows what other people around me are searching, and so it can predict.  And on my phone Google even knows where I am and predicts where I want to go next.  And so the learning becomes a "cloud" of learning, or as Steve puts it, a "hive" of learning that includes the technology.

So, thank you Steve Wheeler for introducing me to your new word, rhizonomy:


Learning 3.0 will be user and machine generated, and will in all respects be represented in what I will call  'rhizonomies'. The rhizonomic organisation of content will emerge from chaotic, multi-dimensional and multi-nodal organisation of content, giving rise to an infinite number of possibilities and choices for learners. As learners choose their own self determined routes through the content, so context will change and new nodes and connections will be created in what will become a massive, dynamic, synthetic 'hive mind'. Here I do not refer to any strong artificial intelligence model of computation, but rather a description of the manner in which networked, intelligent systems respond to the needs of individual learners within vast, ever expanding communities of practice. Each learner will become a nexus of knowledge, and a node of content production. Extending the rhizome metaphor further, learners will act as the reproduction mechanisms that sustain the growth of the semantic web, but will also in turn be nurtured by it. Learning 3.0 will be a facet of an ongoing, limitless symbiotic relationship between human and machine. (Wheeler, 2012)

So now, back to the Geocaching example.  Through Geocaching I am learning more about the area where the cache is.  But, actually, the area is learning more about me too.  While visiting Bloemfontein last month I woke up to the roar of lions.  Yes, I thought, this is Africa, but lions in the middle of town?  Or was I just imagining things.  Then I opened my Geocaching app and realized that I was right next to Bloemfontein Zoo. And, very close to the Lion's cage, there is a cache.  So I paid my R27 entrance fee, and found two caches.
So, my learning is obvious.  But wait, there's more.  The owner of the cache learnt about me, and the Geocaching community learnt about my caching behaviour, and the zoo learnt that having caches inside could potentially earn them R27 per enthusiastic geocacher.
And that is the mind boggling thing about Learning 3.0 - the integration of machine learning and human learning. STUPENDOUS.

Tomorrow we will bid a last farewell to my late Dad's elder brother, Oom Frans.  After my dad and my brother passed away, he was my most closest and most senior paternal relative, and our Pater Familias.
I last saw him at Oom Chris's 75th birthday, when he congratulated him on having grown up nicely, and having married the right wife.  I last spoke to him just before Christmas when he gave me some useful information and telephone numbers of the "Fish" relatives in Cape Town.
To me Oom Frans was the "GLS" model of my dad.  Essentially the same, but with electric windows, leather seats and air conditioning.  And I don't use the motor car metaphor lightly. My earliest memory of him is of his family driving away in a grey "Up and Down" Citroen - a car that so fascinated me that I bought an old one for my own son at the beginning of this year.  When they returned from their UK posting in the early seventies, they brought along an Austin 11/55 just like ours, but theirs had "inertia reel" seatbelts, and a heated rear window...  When they returned from Germany, he had a BMW like my grandfather's, but it had metallic paint. When they returned from Greece, they had a small Mercedes 190 - the only one in Pretoria.  Then things went really pear-shaped and he bought a Chrysler Neon, but he redeemed himself by finally getting a Subaru with a bigger racing fin at the back than any other car I'd seen.
From the beginning there was something fascinating about him and his family.  Their house in Berea Street had push-button light switches, not levers like ours. They had a dome clock with a pendulum that went round and round, and a rocking horse that you wouldn't believe...
And then they went away.  For six years - my whole primary school life, he and his family were a newspaper cutting in Ouma Bunty's flat at Talisman 116. 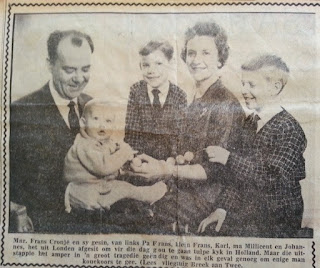 My fondest memories of Oom Frans and his family are from two or three amazing junior highschool years when I visited them every Saturday. When "Nefie" and I cycled through Brooklyn on the Moulton and the Chopper, when Frans Junior (then Frannie) sang all sorts of songs like "Have you ever gone past an Aston Martin when it's standing still? You will probably find it's talking to a Mini, grill to grill."  And Carel had a toy model of Lady Penelope's pink Rolls Royce!
Then there were the in-between years when they were away in Germany and Greece. But we reconnected when they returned and they were guests of honour at just about every house party we had at 146 Hugh street.
After my father passed away, I really got to appreciate the time he gave me in discussing the old days.  Here in Cape Town he took us to Bantry Bay and showed us where Grandfather Fish's house was, and showed us where they swam in the sea and tried to warm it up with boiling water!!!
I re-read Grandfater Fish's "Autobiography of a Counterjumper" after seeing his painting in the City Hall; and then I came across the lovely little piece "An evening with my grandson" The baby in that story is the man who passed away - what a sense of continuity.
He was also the driver behind the "Familiebrief" in which the five siblings, (and later the four siblings and my Mom) shared their weekly doings, thus keeping such a strong connection despite their huge geographic dispersion.
And now he's gone, and so is a significant link to my past. But he will stay in my memory.
An in automotive spirit I salute him like Renault saluted the Citi Golf:
Respect.

Posted by Johannes Cronje at 10:57 AM No comments: