The beginning or the third year!

This month marks the beginning of my THIRD year at CPUT.
I find it hard to believe that we have survived two years together.
What troubles me, though is that, although I arrived here with stars in my eyes and high hopes for the future, after two years I get the idea that nothing has changed. That, instead of changing the Faculty, the Faculty has changed me.
Furthermore, I need to know if I am on the right track. I started here saying that my main job is to ensure that the Faculty staff achieve their objectives.
So, I need to meet with you and your department as soon as possible during a regular departmental meeting.
I need you to put three things on the agenda.
a. What has changed in the last two years? (What are we doing differently, what are we experiencing differently - for better and for worse).
b. What are your plans (each individual, or the department - I leave that to you) for the next three years?
c. What must the Dean do next?

I look forward to an open and frank, yet positive discussion.
Posted by Johannes Cronje at 11:58 AM No comments:

What is it with conferences

So here I am sitting in a conference and spending the time updating my blog, my Facebook page, my Twitter, and even re-arranging my hard drive - while up in front a sequence of pretentious people are READING out loud a lot of pompous generalisations that they are presenting as science.
Moreover, not only do they read in boring monotone, they also stumble over their words.
And I could have read it all in about a quarter of the time.
Why do people do this!
How can one revise what happens at conferences that it actually becomes interesting!!!
Posted by Johannes Cronje at 10:56 AM 1 comment: 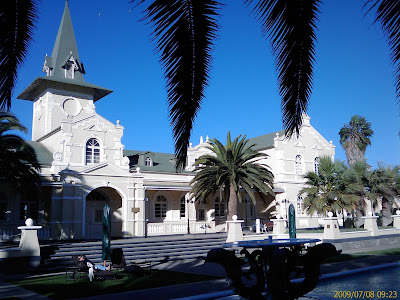 We are staying in the most beautiful place - the Swakopmund hotel, which used to be the railway station.
I am working with sixteen delegates from Namibia and Kenya and we are working on developing e-learning strategies for about four or five institions.
What I am enjoying most about it is testing my model that integrates the Balanced Scorecard and the ADDIE model.
I will be reporting on it during the E-Learning update on 3/4 September. 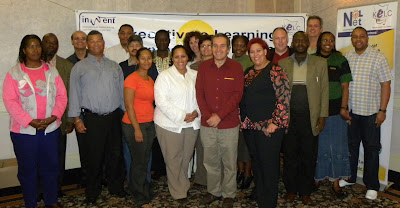 Posted by Johannes Cronje at 11:14 AM No comments:

Prof Piet Kommers of the University of Twente in Enschede, the Netherlands was instrumental in getting me to Brussels last week.
He asked me to be the respondent for a document that he had written for a European Union-sponsored report on the social impact of ICT (Information and Communication Technologies). Piet wrote the section on lifelong learning.
This commitment required some juggling of my diary. I had agreed to go to Kartoum, Sudan, and Swakopmund, Namibia, and finally Johannesburg. I thought I could combine all three. Turns out that the costs involved would be enormous. The result was that I postponed Khartoum, and separated all the trips.
It turns out that the fastest, and cheapest way to get from Johannesburg to Brussels, is on Ethiopian Airways via Addis Ababa and Paris - 16 hours and your're there.
Meanwhile Jolanda de Villiers Morkel of CPUT department of Architecture put me in contact with Dolf Wieers, a retired architect, who has had a long-standing relationship with our Department. Dolf thought it would be a good idea to take me on a trip to Ghent, and his brother, Paul was kind enough to lead me around through Brussels. I took myself on a trip to Antwerp.
You can see the pictoral evidence on my Facebook profile in an album called Belgium 2009.
Paul Wieers speaks no English, so it gave me the opportunity to learn Flemish in a great hurry. You just speak Afrikaans slowly and with a terrible accent (ha ha ha). It was great to get to the stories behind the stories of all the institutions and constructions in Brussels, and Paul, a trained tour guide and teacher at heart was careful to stop from time to time and to quizz me to ensure that I was learning. (In what year was the main square bombed? And what are the dates on these buildings...)
Ghent is an amazingly beautiful city, and having an architect take you around and point out sites of historical and architectural importance was a rare privilege.
Then it was on to the European Union. As I was getting ready to sit down the chap next to me was fiddling with the plug of his computer, and I saw a little bit of his name tag. His surname was Van Oranje. This, I thought, was rather a grand surname. Then his name became visible and it turns out to be Constantijn. Oh gosh, I thought. How funny, a really grand surname like Van Oranje, matched with a really grand sounding name of Constantijn. So I asked the chap if he was related to the Dutch Royal Family whom I know to be called Van Oranje. "Sort of" he replied. I then mentioned to him that we had a whole provinde named after them, but that we changed the Orange bit after 1994.
Then it dawned on me that he might well be PRINCE Constantijn of Orange. When I looked more closely at his name tag, I notice he had blacked out the word "Prins"! Piet Kommers took a picture for my "Big Trees" collection.
The presentations at the EU were very interesting, and I will be reporting more closely on what I have learnt - once the report has been published.
All in all it was a tremendous experience, and the only thing that I regretted is not taking some or all of my famliy along to share it!
Posted by Johannes Cronje at 6:13 PM No comments: